The Rules of La Nivernaise

The Line is to consist of six packets, of which the uppermost card of each is alone available, until by its removal the one beneath is released—the card which is uppermost at the time being always the available one. As many cards in each of the packets forming the Line may be examined as there are vacancies in the Flanks. All foundations must follow suit. In re-dealing, the Line packets must be taken up in succession, beginning on the left; then the whole together turned and re-dealt as before.

How to Play La Nivernaise

You next deal from left to right six packets, each composed of four cards dealt together, and placed in a horizontal line underneath. These packets are called the Line, and will receive successive additions.

If any of the foundation cards appear on the surface of the Line, or on the Flanks, play them in the spaces reserved; as also any other suitable cards subject to Rule I, taking, however, in preference, cards from the Flanks, as the vacancies so made are most important.

Note.—So necessary to success are these vacancies that if, after dealing the first round of the Line, none have been made, it is scarcely worth while to continue the game.

They may be filled from the pack or from the Line, but it is never prudent to fill up all vacancies; one at least should be left.

Single cards are not to be replaced on the Line; but if an entire packet has been played off, four more cards are to be immediately placed in its stead, and this rule applies to each several round.

When the resources thus far are exhausted, deal a second round of four cards together, on each of the Line packets as before, and continue thus to deal successive rounds until all the cards are dealt out, but between each round pause and examine the Line (Rule II) and the Flanks, and play all available cards.

The whole of the pack having been dealt, and further progress at an end, take up the line as prescribed in Rule IV, re-deal, and play exactly as at first.

There is only one re-deal.

In forming the foundations, one card at a time may be exchanged from the ascending to the descending sequences, and vice versâ. 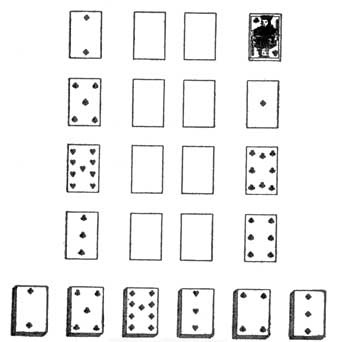