How to Play Nestor Solitaire

One pack of cards is requried.

Deal out in horizontal lines six rows each containing eight cards. In dealing these, you must be careful that there should never be two cards of equal value in the same perpendicular line. If, for example, two kings or two fives (the same, of course, applies to all the cards) were to be underneath each other, even though several other cards intervened between them, it would be useless to proceed. You must, therefore, consider the duplicate card as unavailable for the moment and place it at the bottom of the pack in hand, and proceed to deal the next card.

When the tableau is complete, four cards will remain, which are to be placed aside, as a reserve. You then examine the tableau and endeavor to pair the cards, taking only those of the lowest row, until their removal releases those above. When no more can be paired, you have recourse to those of the reserve, taking them up one by one. If the first cannot be paired, put it aside, taking the next, but the card or cards so put aside can be paired afterwards if the opportunity of doing so arises. If all the cards cannot be paired, the game has failed. 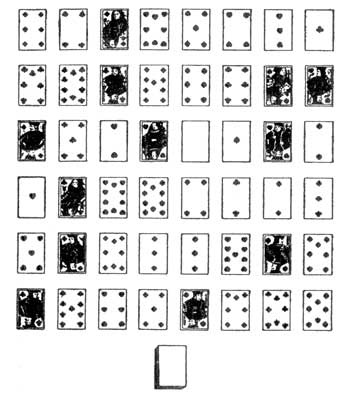