This game very much resembles Imaginary Thirteen Patience, described in the First Series, but there are differences of play which make it rather more interesting. It requires two packs, which may or may not be shuffled together. The point is immaterial. Lay eight cards in a row - they must all be different, and there must be no King amongst them; next count out the remainder of the cards in packets of twelve, and place them, face upwards, under the primary row. Now make a third row, underneath the second, by taking any top cards which will double one of the primary ones.

Of course, it is plain sailing up to six, which is doubled by a Queen; after that the number thirteen calculation has to be made. For instance, in the Diagram three of the base cards - Knave, Ten and Nine - exceed 13 when doubled. The Knave, which counts 11, requires (as shown) a nine in the third row, since 22-13=9. The Ten is waiting for a Seven to appear, for 20-13=7; under the Nine a Five is placed in the third row, as 18-13=5. The top and bottom cards are now to be added together (still taking out the 13 where the sum exceeds that figure); and if there is a top card of any of the centre packets available, it must be taken for the third row. For example: the Nine in the first centre packet must be placed on the Six in the bottom row, since 6 and 3 equal 9. Now, 9 and 3 will equal 12, so the Queen may come from the seventh centre packet, and cover the Nine. If by taking these cards others are disclosed available for any of the lower packets, they must be placed accordingly.

When you have gone as far as you can in doubling the top row, and adding the two together, and there is no other card available, you must take up the left-hand packet and distribute it. Deal the first card into the vacant spaace, then on the remainder of the packets in rotation, till you have dealt out the packet. This discloses a fresh lot of cards, and gives you more opportunities for continuing your calculations and adding to the lower piles. As soon as the top and bottom added together make thirteen, the pile is crowned with a King, and is finished.

Whenever you come to a stand, distribute a packet, always taking the left-hand one; if, as often happens, there are three or four single cards on the left hand, gather them up till you come to a packet with more than one, then deal round. Continue in this way until you come to the eighth packet, but there your chance ends; after distributing this one, you have no fresh deal. You have, indeed, one privilege; you may draw a card from underneath any of the packets; and you must choose one that will enfranchise the greatest number; but unless you succeed in placing all the Kings; you have failed in the game :(. 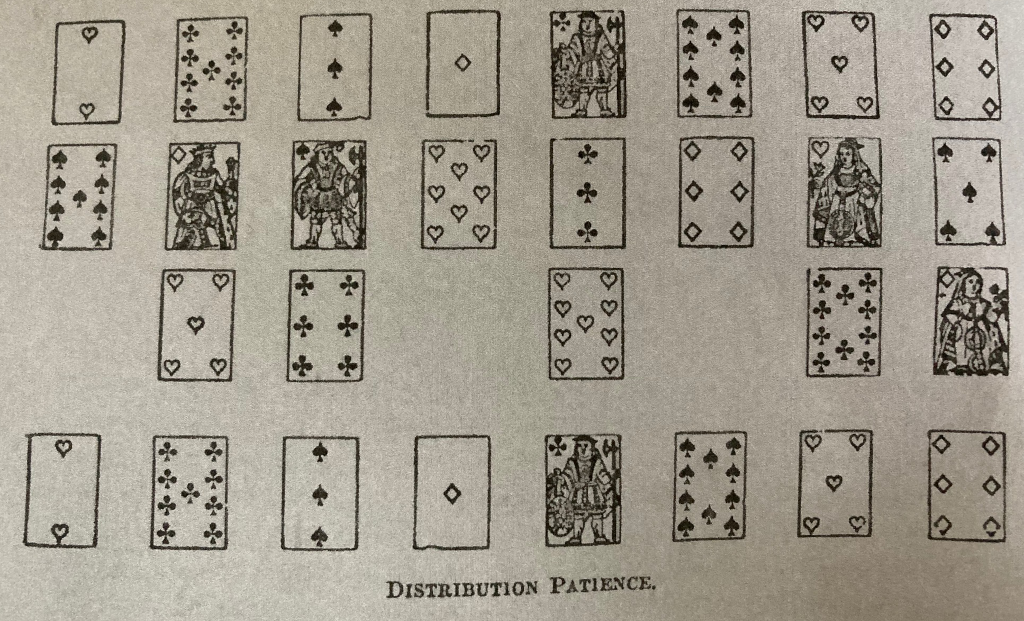