I love this game, and it's better played on a full screen. However Trefoil Solitaire (which is similar and easier) is even better in my humble opinion.

How to Play La Belle Lucie

There are eighteen columns of cards. The first seventeen of these contain three cards, and the final column contains a single card only. These eighteen colums are known as the Tableau. The Tableau is outlined in black in the image below.

The four Foundation cards are to the right of the Tableau, and on the left is a redeal button.

The aim is to move all cards from the Tableau onto the Foundations in ascending order from Ace to King. 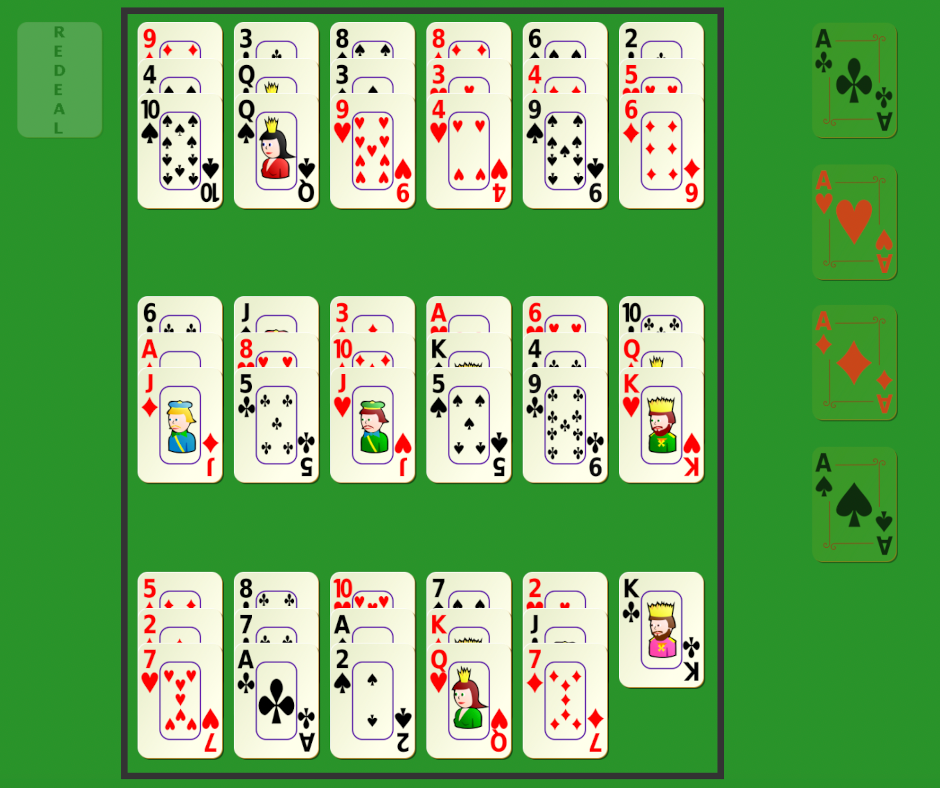 If you are lucky enough to have an Ace as the top card of any of the Tableau column, it can be moved immediately onto the Foundations, as can be seen below. 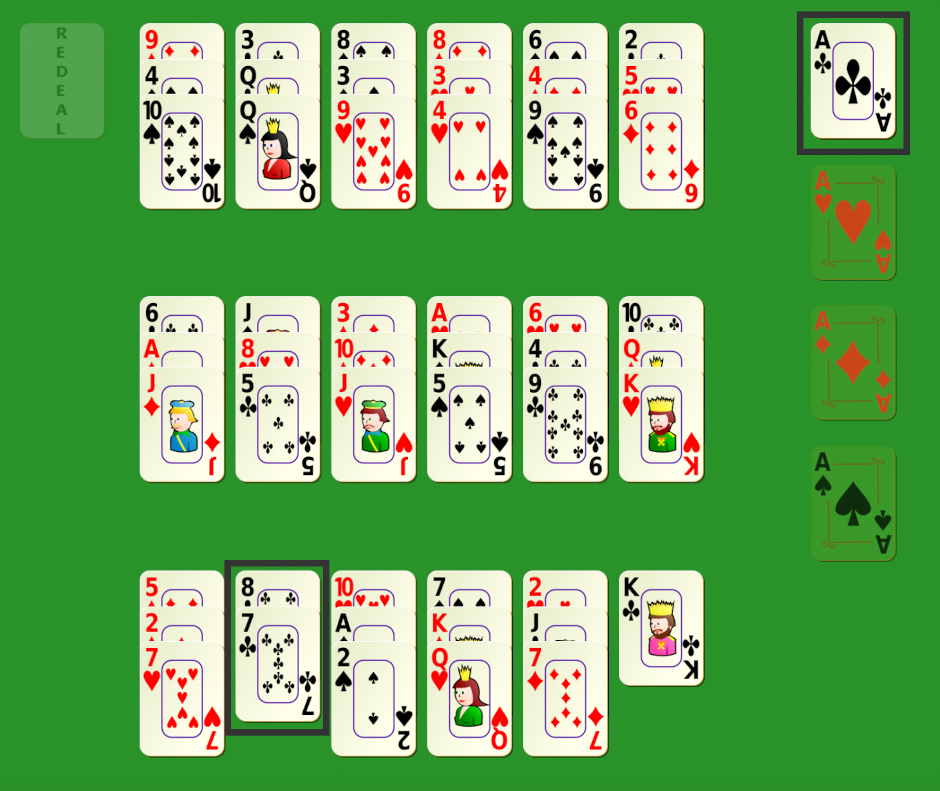 A card on the Tableau can be placed on any other Tableau card where it is one less in value and of the same suit. The Nine of Spades has been placed onto the Ten of Spades. 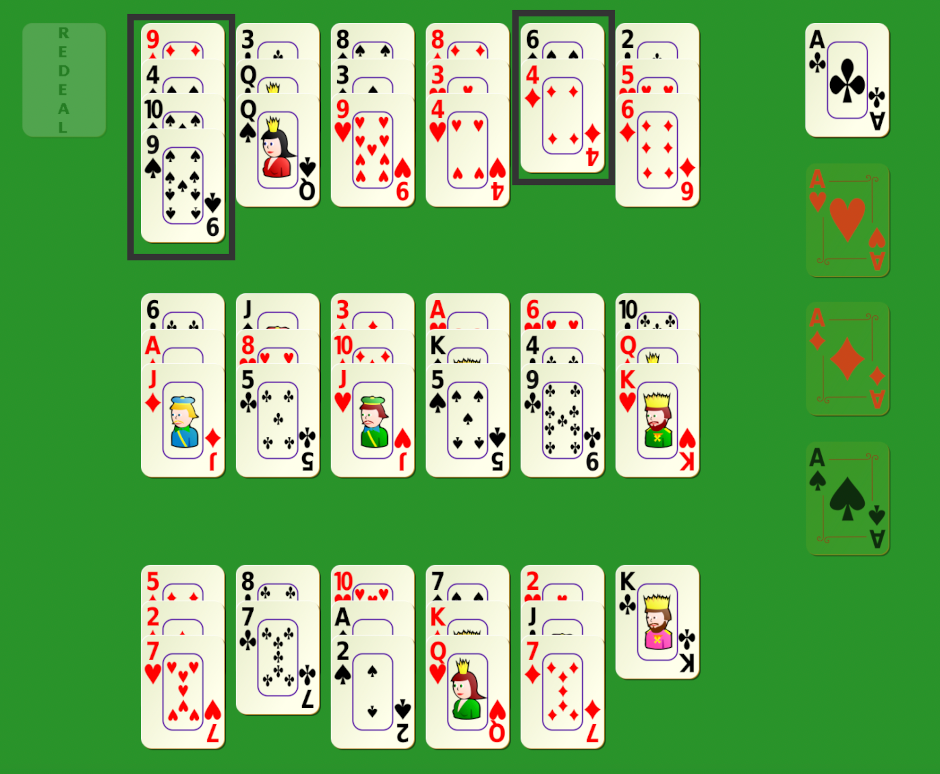 The game here as progressed, and there is now an empty column on the Tableau.

Cards can not be placed on empty columns, and no further moves can be made.

Two redeals are allowed in La Belle Lucie, and in this game (which I later lost) it was time for a redeal.

It is in fact a difficult game to win. 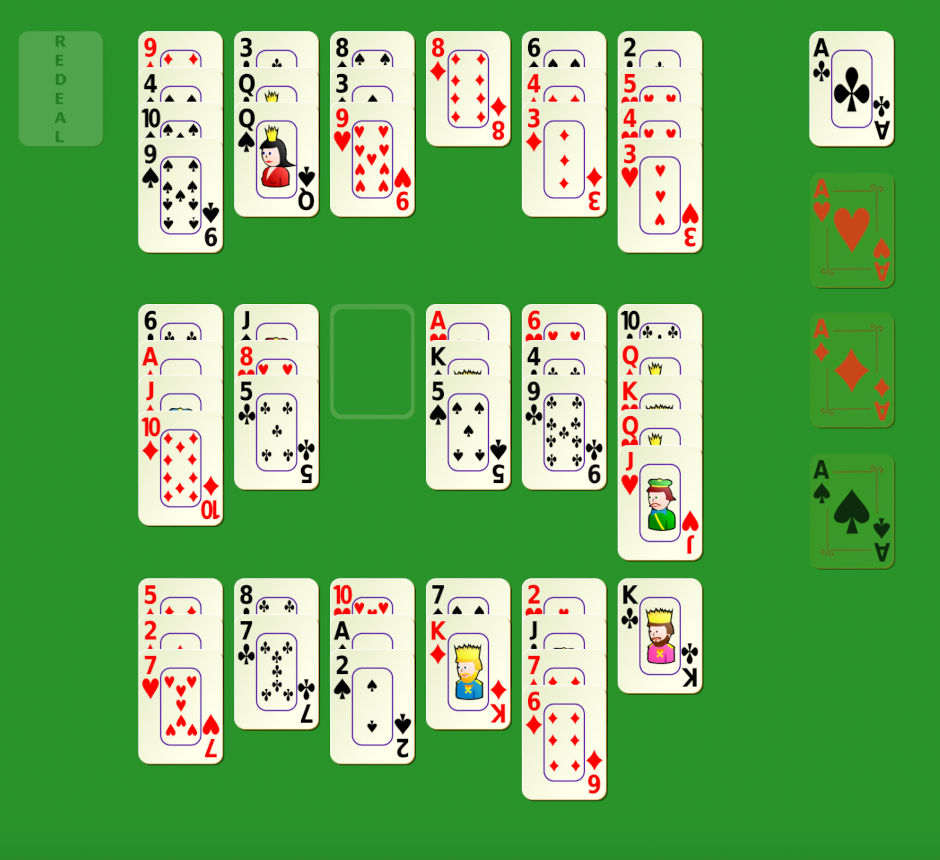 This is an archaic description of how to play La Belle Lucie taken from Lady Cadogan's illustrated Games of Patience.

One pack of cards is requried.

The uppermost card of each packet is alone available, until by its removal it releases the one beneath.

Deal out the entire pack in packets of three cards dealt together and placed as in tableau. The last packet, however, will contain but one card.

The four aces form the foundation cards, and are to ascend in sequence to kings.

Having placed the tableau, take any aces that may appear on the surface of the packets and play them in their allotted spaces, and upon them any other suitable cards, subject to Rule I.

When all available cards have been played, you proceed to release others, by forming marriages in a descending line on the tableau; but great care is requisite, lest in releasing one card another still more necessary to success should be blocked. The whole tableau should be carefully examined, and the combinations arranged so as to release the greatest number of suitable cards.

When this has been done, and there are no more available cards to play, the entire tableau may be taken up, shuffled and re-dealt (if necessary twice), then played again as before.

This game can also be played with two packs, the eight aces forming the foundation cards, and double the number of packets being dealt for the tableau. It is then called "The House in the Wood."

There is also another way of playing it with two packs. The foundation cards to be four aces, and four kings of different suits, and marriages made both in ascending and descending lines. The name of this game is "The House on the Hill." 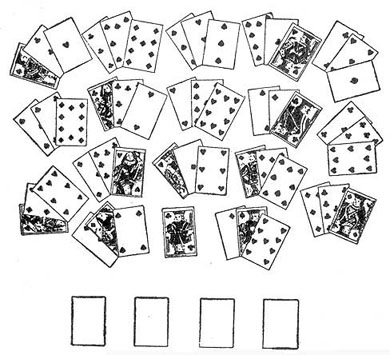