I came across this in Lady Cadogan's illustrated Games of Patience. Lady Cadogan wrote the first ever compendium of patience games.

The Tableau (six piles of six cards) are named Flower Beds in her description of the game, and the sixteen remaining cards (to the right of the sceen arranged downwards) are the Bouquet. These can be played at any time to either the Flower Beds of Foundations.

As written by Lady Cadogan herself:-

Any card in the Bouquet and the uppermost cards of the Garden are available. The removal of the top cards releases those beneath.

Cards placed in sequence on the Garden need not follow suit.

How to Play Flower Garden Patience

Deal six packets of six cards dealt together, and so spread that all are visible. The four aces are the foundation cards, and are to ascend in sequence to kings (Rule II).

Sixteen cards will remain, which are called the Bouquet, and must be kept in the hand. Take from the Bouquet and from the Garden any aces or other suitable cards (Rule I) and play them.

Next place cards in descending sequences in the Garden, transferring them from one packet to another as often as you please (Rules I and III), and you may place cards from the Bouquet in the same way. For example, place the four of diamonds (see tableau) on the five of clubs, then take the ten of hearts from the Bouquet and place it on the knave of diamonds. The nine of clubs can now be transferred, and the ace and deuce of diamonds are released.

This patience is exceedingly difficult. Cards taken from the Bouquet cannot be returned to it, and there is only one deal. The greatest care must, therefore, be taken in placing cards in sequence and in playing them. You are not obliged to do either, and it is often better to leave a card than to play it, as it may be useful in releasing others.

When an entire packet is cleared off, you may begin a new one with a card from the Bouquet or from the Garden (Rule I), and this is often the only means of removing a king, which, being the highest card, can never be transferred. 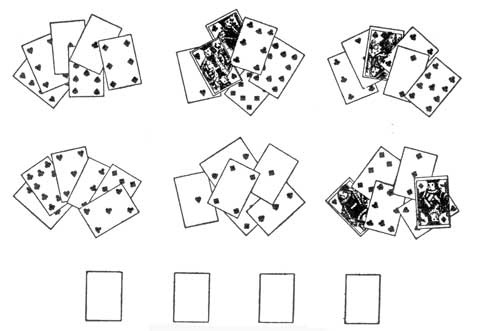