The game is made up of 104 cards, taken from four packs of virtual cards.

This particular game is Spider one suit, and naturally all the cards must be of the same suit. It is usual to use Clubs. I've decided to use hearts, as we need more love in the world.

The Tableau is composed of ten columns, with five cards dealt in each of the first five columns, and four dealt in the remaining columns.

All remaining cards are placed in the Stock (on the top left of the screen).

The aim of (all versions) of Spider Solitaire is to empty the Tableau at which point the game has been won.

The cards need to be ordered in descending runs from King to Ace by suit on the Tableau.

As each run is completed it will be placed on the Foundations, and so removed from the Tableau.

Cards can be moved from Column to Column either individually or in groups. A group of cards can only be moved when it is descending and in suit. By the way, this explains swhy Spider Solitaire one suit is easier. Multiple suits on the Tableau decrease the number of opportunities to create longer runs. (A few strategies to help with this are outlined here).

The Stock and dealing are unusual in particular if you have only played Klondike Solitaire.

In Spider Solitaire, a mouse click or a touch on the the Stock will result in a card being dealt to each column.

You (generally) only do this when no other Tableau moves are possible, because as you will see, your neatly descending runs will be ruined. Let's pretend that you have constructed a column of Ten, Nine, Eight and Seven, which can be moved and placed elsewhere when needed. You touch the Stock and cards are dealt. An Ace lands on the Seven!

You now have to move the Ace onto another Column before it can be moved and used as a group.

This is of course where the fun and skill lies:)

Cards can only dealt from the Stock when each column has at least one card in it.

How to play Spider Solitaire (One suit)

One suit Spider Solitaire is my favourite card game. I found it difficult to understand initially, and a picture is worth a thousand words so here are some pictures and explanations.

The bottom rows of cards are named the Tableau. In the picture, the first card on the Tableau is the Ace of hearts and the final card is the Jack of hearts.

You can see that all cards are of the same suit.

Cards can be dragged and dropped around the Tableau to create descending runs of cards. The Jack and Ten are highlighted in this picture.

The Ten has been dragged and dropped onto the Jack, and a Four revealed in place on the Ten.

There are plenty of other moves that could be made here.

The Four could be moved onto the Five. The Three onto the Four and so on. Each of these moves reveals another card.

At this stage of the game, you can see runs of cards. There is the Five to the Ace of Hearts, and the Queen to the Eight.

There is also an empty space in the Tableau.

Remember that as long as there is an empty space, no further cards can be dealt from the Stock (on the top left of the image).

Any card, or group of (face up) cards in descending order can be dragged onto an empty space in the Tableau.

In general it is better to use higher value cards to fill the gap than lower. 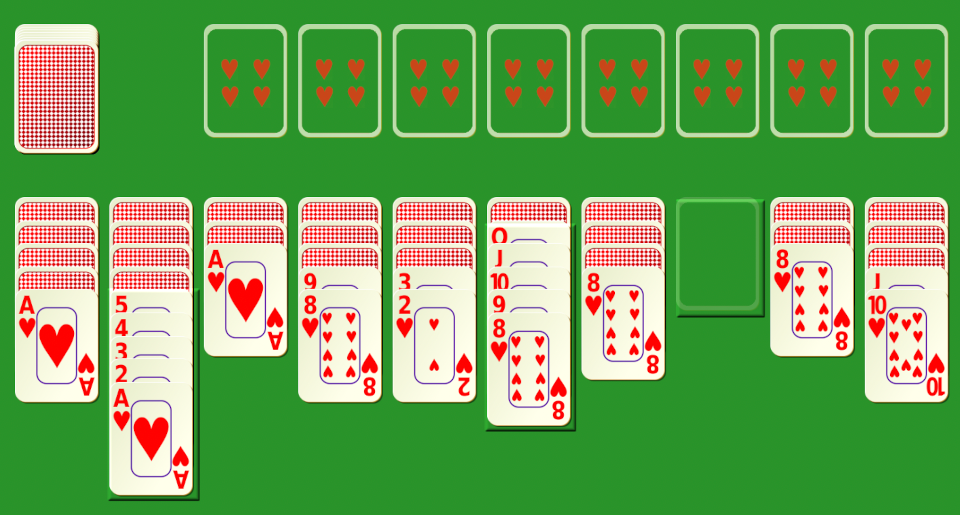 There is a run of cards from the King of Hearts to the Two of Hearts.

And an Ace ready to be placed on the Two. Once this is done, the row of cards will be moved from the Tableau to the Foundations.

The Foundations are on the top of the image and marked with hearts surrounded by a white border. 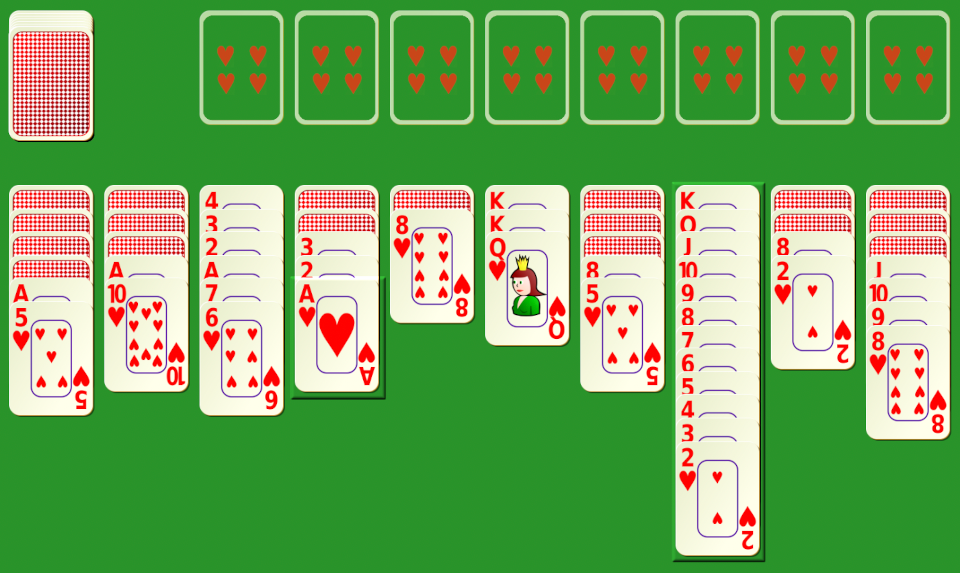 The first run has been completed and moved onto the Foundations.

Repeat seven more times, and the game is won:)